What is Network Infrastructure?

Network infrastructure  is a category of  information technology  that is used to provide network services that allow devices to connect and communicate. This includes foundational  networking  hardware, software, services and facilities. The following are common examples of network infrastructure. 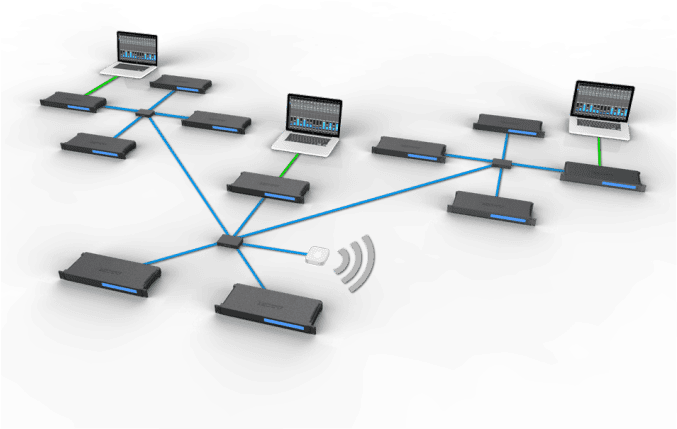 Routers connect devices and networks together by forwarding traffic. This is how traffic gets from one place to another on a network such as the internet.

Switches connect devices to a network by forwarding traffic. For example, the computers in an office might be connected to switches as a means of creating a local area network.

A simple type of switch that forwards all traffic to every connected device.

Devices that make requests on behalf of clients. Often used to monitor, filter and log traffic on a corporate network.

Devices that distribute work to servers to allow services to horizontally scale.

A service that appears to clients to be a server that is really forwarding requests to servers. A reverse proxy may perform services such as load balancing, encryption and security.

A family of standards for networking that include various cable technologies and compatible computing devices, switches, hubs and routers.

Hardware that allows wireless devices to connect to a wired network. Typically provides a wifi service.

A device that receives a signal and retransmits it. Often required to transmit data great distances.

A device that is similar to a repeater for fiber optics. Increases the strength of an optical signal directly without converting to an electrical signal.

Facilities where networks connect to each other to exchange traffic.

A firewall controls network traffic based on a set of rules. A basic tool for network security.

Platforms for managing authorization and authentication.

Services that publish certificates that describe organizations and their public encryption keys. Basic infrastructure for encryption on the internet such as SSL and TLS.

The domain name system, or DNS, is a global distributed system for translating domain names to IP addresses.

Dynamic host configuration protocol, or DHCP, is a service that automatically assigns IP addresses to devices.

Simple mail transfer protocol, or SMTP, is a type of service that delivers email.

Technologies for voice communications over internet protocol. For example, software that allows you to make long distance phone calls using an internet connection.

Virtual private network, or VPN, are services for securely connecting to a private network over an untrusted network such as the internet. For example, VPN software that allows an employee to connect to an office local area network from home.

Services that allow publishers to serve content such as images and videos from a data center that is close to each user to reduce latency.

Services that allow you to compute in different geographical locations to achieve scale and to compute more efficiently by processing data geographically close to clients and/or data sources.