Electronic data interchange (EDI) is the concept of businesses electronically communicating information that was traditionally communicated on paper, such as purchase orders and invoices. Technical standards for EDI exist to facilitate parties transacting such instruments without having to make special arrangements.

EDI has existed at least since the early 70s, and there are many EDI standards (including X12, EDIFACT, ODETTE, etc.), some of which address the needs of specific industries or regions. It also refers specifically to a family of standards. In 1996, the National Institute of Standards and Technology defined electronic data interchange as "the computer-to-computer interchange of strictly formatted messages that represent documents other than monetary instruments. EDI implies a sequence of messages between two parties, either of whom may serve as originator or recipient 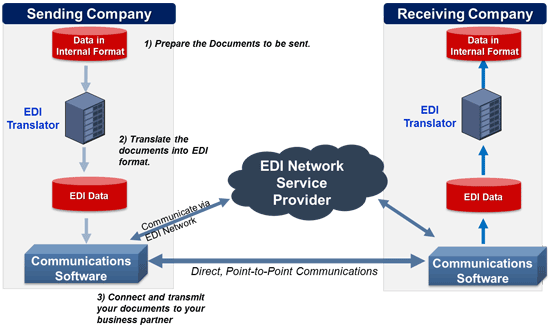 EDI is used for electronic funds transfer (EFT) between financial institutions, which facilitates such common transactions as the direct deposit of payroll checks by employers, the direct debit of consumer accounts to make mortgage or utility payments, and the electronic payment of federal taxes by businesses. Another common application of EDI involves the direct exchange of standard business transaction documents—such as purchase orders, invoices, and bills of lading—from one business to another via computer. EDI is also used by retail businesses as part of their electronic scanning and point-of-sale (POS) inventory replenishment systems. Overall, EDI offers a number of benefits to businesses and—thanks to the rapid evolution of the related technology—is becoming more readily available to small businesses all the time.

"EDI saves money and time because transactions can be transmitted from one information system to another through a telecommunications network, eliminating the printing and handling of paper at one end and the inputting of data at the other," Kenneth C. Laudon and Jane Price Laudon wrote in their book Management Information Systems: A Contemporary Perspective. "EDI may also provide strategic benefits by helping a firm 'lock in' customers, making it easier for customers or distributors to order from them rather than from competitors." EDI was developed to solve the problems inherent in paper-based transaction processing and in other forms of electronic communication. In solving these problems, EDI is a tool that enables organizations to reengineer information flows and business processes. It directly addresses several problems long associated with paper-based transaction systems:

Time delays— Paper documents may take days to transport from one location to another, while manual processing methodologies necessitate steps like keying and filing that are rendered unnecessary through EDI.

Labor costs— In non-EDI systems, manual processing is required for data keying, document storage and retrieval, sorting, matching, reconciling, envelope stuffing, stamping, signing, etc. While automated equipment can help with some of these processes, most managers will agree that labor costs for document processing represent a significant proportion of their overhead. In general, labor-based processes are much more expensive in the long term EDI alternatives.

Accuracy— EDI systems are more accurate than their manual processing counterparts because there are fewer points at which errors can be introduced into the system.

Information Access— EDI systems permit myriad users access to a vast amount of detailed transaction data in a timely fashion. In a non-EDI environment, in which information is held in offices and file cabinets, such dissemination of information is possible only with great effort, and it cannot hope to match an EDI system's timeliness. Because EDI data is already in computer-retrievable form, it is subject to automated processing and analysis. It also requires far less storage space.

Several elements of infrastructure must exist in order to introduce an EDI system, including: 1) format standards to facilitate automated processing by all users, 2) translation software to translate from a user's proprietary format for internal data storage into the generic external format and back again, 3) value-added networks to solve the technical problems of sending information between computers, 4) inexpensive microcomputers to bring all potential users—even small ones—into the market, and 5) procedures for complying with legal rules. It has only been in the past several years that all of these ingredients have fallen into place.

FORMAT STANDARDS - To permit the efficient use of computers, information must be highly organized into a consistent data format. A format defines how information in a message is organized: what data goes where, what data is mandatory, what is optional, how many characters are permitted for each data field, how data fields are ordered, and what codes or abbreviations are permitted.

Early EDI efforts in the 1960s used proprietary formats developed by one firm for exclusive use by its trading partners. This worked well until a firm wanted to exchange EDI documents with other firms who wanted to use their own formats. Since the different formats were not compatible, data exchange was difficult if not impossible. To facilitate the widespread use of EDI, standard formats were developed so that an electronic message sent by one party could be understood by any receiver that subscribes to that format standard. In the United States the Transportation Data Coordinating Committee began in 1968 to design format standards for transportation documents. The first document was approved in 1975. This group pioneered the ideas that are used by all standards organizations today.

North American standards are currently developed and maintained by a volunteer organization called ANSI (American National Standards Institute). The format for a document defined by ANSI is broad enough to satisfy the needs of many different industries. Electronic documents are typically of variable length and most of the information is optional. When a firm sends a standard EDI purchase order to another firm, it is possible for the receiving firm to pass the purchase order data through an EDI translation program directly to a business application without manual intervention. In the late 1990s, international format standards were established and introduced as well to facilitate international business activity.

VALUE-ADDED NETWORKS (VANS) - When firms first began using EDI, most communications of EDI documents were directly between trading partners. Unfortunately, direct computer-to-computer communications requires that both firms 1) use similar communication protocols, 2) have the same transmission speed, 3) have phone lines available at the same time, and 4) have compatible computer hardware. If these conditions are not met, then communication becomes difficult if not impossible. A value-added network (VAN) can solve these problems by providing an electronic mailbox service. By using a VAN, an EDI sender need only learn to send and receive messages to or from one party: the VAN. Since a VAN provides a very flexible computer interface, it can talk to virtually any type of computer. This means that to conduct EDI with hundreds of trading partners, an organization only has to talk to one party. In addition, VANs provide important security elements for dissemination of information between parties.

INEXPENSIVE COMPUTERS - The fourth building block of EDI is inexpensive computers that permit even small firms to implement EDI. Since microcomputers are now so prevalent, it is possible for firms of all sizes to deal with each other using EDI.

PROCEDURES FOR COMPLYING WITH LEGAL RULES - Legal rules apply to the documents that accompany a wide variety of business transactions. For example, some contracts must include a signature or must be an original in order to be legal. If documents are to be transmitted via EDI, companies must establish procedures to verify that messages are authentic and that they comply with the agreed-upon protocol. In addition, EDI requires companies to institute error-checking procedures as well as security measures to prevent unauthorized use of their computer systems. Still, it is important to note that some sorts of business documents—such as warranties or limitations of liability—are difficult to transmit legally using EDI.

Here’s some common EDI transactions that are supported within the X12 and EDIFACT EDI world.